Learning how to read drum sheet music isn’t a necessity, but it’s an important skill that differentiates you from the rest.

As a skill, it helps you get the audition or even the gig that would otherwise be way out of your league.

But… does that mean that only drummers that know how to read drum sheet music build successful careers?

Well, no. I’m pretty sure most professional drummers don’t even know how to read sheet music and that’s because they are so good that the lack of that skill goes unnoticed.

But, while it’s true that a big chunk of professional drummers find success without ever learning how to read sheet music, reading it has plenty of benefits.

Here are some of them:

Even though they look similar, they are indeed different, mainly because instead of each line and/or space on the staff representing a musical note, they represent a part of the drum kit (snare, hi-hat, bass drum, etc.). Drum notation is easier to understand and read than regular sheet music.

Now that we saw the importance of knowing how to read drum sheet music and the differences between drum notation and sheet music, let’s start with the basics:

Also known as the stave, it’s where you draw musical notes. It has 5 parallel horizontal lines and 4 spaces, and each line and space represents a different part of the kit.

The staff itself divides into a few parts, like:

Musical notation/symbol placed at the beginning of the staff, indicating the pitch of the notes you can find in it. Most modern music pieces use 4 clefs: Treble, Bass, Alto, and Tenor.

Fortunately for us drummers (or percussionists in general), the neutral clef (pictured above), also known as the percussion clef, is the only one that matters. The neutral clef indicates that each line and/or space represents a percussion instrument with no precise pitch.

Multiple sections of notes and rests, known as measures, make the Staff. Bar Lines, or simply bars, separate all the measures.

Different types of bar lines indicate different player behavior, as they can force you to continue onward, to repeat a section, or to stop the music altogether.

There are also a few repeat symbols that tell you to repeat the previous, or the previous two (different) measures.

Keep in mind that the two bars repeat symbol indicates that you should repeat the last two (different) measures once, and not the last measure twice.

It’s the space between two bar lines. It’s a segment of time within a piece of music defined by a certain number of beats. It organizes longer pieces of music into smaller pieces to facilitate sight reading or just learning the material in general.

The time signature of a piece of music helps you understand the rhythm and the structure of the piece and it appears at the beginning of every drum sheet music.

If beats group into measures, the time signature ensures that from measure to measure, the beat of the music stays the same.

But what represents each number?

The top number in the time signature represents how many beats are in a measure and the bottom number indicates what kind of note represents one beat.

Let’s start with 4/4, as it’s also known as the common time for a reason (sometimes a capital C replaces the 4/4 in the staff).

The top 4 simply means that each measure includes 4 beats, while the bottom one indicates that quarter notes (1/4, think of it as a fraction) represent one beat.

If we put it all together, we can conclude that in the 4/4 time signature we have four quarter notes per measure and we count it as 1-2-3-4.

If we analyze it the same way we did with the 4/4 time signature, we can safely assume that each measure has 7 beats and eighth notes (1/8) represent one beat.

The last piece to feeling the rhythm, besides the notes values and the time signature, is the tempo.
In music terminology, it’s the speed at which a piece of music should be played, usually measured in beats per minute (BPM).

A tempo of 60 BPM has 60 beats per minute, or a beat each second, while a tempo of 120 BPM is twice as fast, with two beats every second.

The tempo is written above the first bar on a piece of sheet music, usually with the BPM, the term for the tempo, and the note value of a beat (what the denominator of the time signature indicates).

As a drummer, playing in time is one of the most important skills you can master, as the success of the band is highly dependent on your ability to do so.

After learning what everything in the staff means, it’s now time to understand the meaning of each note and rest to read any piece of drum sheet music.

Here’s an illustration of most of the notes and rests you should know: 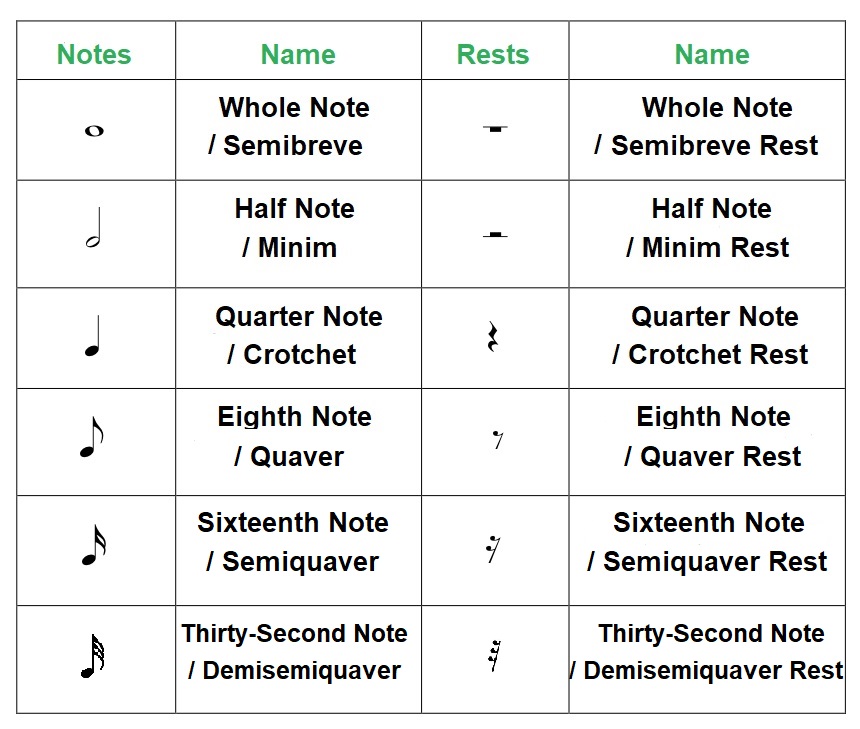 Whole note (semibreve): notated with note heads, but no note stems. It’s played for the entire length of a measure, so if the time signature is 4/4, the whole note lasts for four beats.

Even though it’s less common, there’s also a double whole note (breve) that has twice the duration of the whole note.

Whole rest (semibreve rest): just like the whole note, it applies to the whole measure, except this time, it’s a rest (silence).

Half note (minim): notated with a hollow note head and a straight flagless stem. Plays for half the duration of a whole note. If the whole note lasts for 4 beats in a 4/4 time signature, the half note lasts for two. In that case, we’ll have two half notes in each measure.

Half rest (minim rest): a silence of the same duration of a half note.

Quarter rest (crotchet rest): It’s a silence of the same duration as a quarter note

All the next note values include beams when there’s multiple notes:

Eighth note (quaver): notated with a black note head and a straight stem with one flag. Played for one eighth the duration of a whole note, one-fourth of a half note, and half of a quarter note.
A single eight-note is stemmed with a flag, while two or more are beamed together.

Eighth rest (quaver rest): It’s a silence of the same duration as an eighth note.
Both the eighth note and rest are usually counted as one and two and three and four (“1 + 2 + 3 + 4”).

Sixteenth rest (semiquaver rest): It’s a silence of the same duration as a sixteenth note.

Thirty-second rest (demisemiquaver rest): it’s a silence of the same duration as a thirty-second note.

A dot after the note head adds another half of that note’s duration to it. For example, a half note with a dot equals a half note and a quarter note. A tie may also be used to extend a note, as two notes tied should be held as long as the value of both of those notes together, and ties are commonly used to signify held notes that cross measures or bars.

Before we dive into a few examples of basic grooves and fills, we need to take a quick look at the basic and most commonly used notations:

If you want a complete drum key, the folks at onlinedrummer offer a free, ready-to-print version HERE.

The drum notation key tells us which part of the drumset we play based on where the notes are within the staff.

In general, a black note head represents the drums and an X note head the cymbals/percussion instruments.

The higher the pitch of the instruments, the higher we place it within the staff. That’s why a bass drum is usually notated in the last line, or between the last two lines, and the cymbals on or above the first line.

If you understand and memorize all the basic drum notations, everything else is nothing but an adaption of the basic ones and should be as easy to understand.

Putting it all together

Now that we figured out everything that’s usually in the staff, the basic notes and rests, the tempo, and the drum notation key, it’s time to practice with some basic grooves and fills.

Let’s start with the most basic groove I could think of.

The groove is in 4/4, and we know by now that each measure has 4 beats and each beat is represented by a quarter note.

We also know that the cymbals are represented by an X note head and that the X above the first staff line is a Hi-Hat.

In this groove, we have eight of them, which makes them eighth notes. Anyway, we don’t need to count, since we know eighth notes are notated with one flag, or one beam when there’s more than one, which is exactly the case.

If the quarter note represents the beat and we have eighth notes on the Hats, we’ll play two notes per beat on the Hi-Hat the whole time.

With that in mind, it’s easy to conclude that the groove has a bass drum note in each 1 and 3, and a snare in each 2 and 4, as the second space in the staff represents the snare and the last, the bass drum.

Now let’s make a simple exercise. Put everything together, and imagine what the groove should sound like. Got it? Now play the next sound file and find out if you’re right or not.

Don’t worry if you’re not 100% correct as of now, it’ll get better with time and practice and soon enough, writing and reading drum sheet music will become second nature.

Now that you’ve learned a groove, add a fill to your portfolio. Let’s start with an easy one.

We got another 4/4 time signature, so there are 4 beats in each measure and quarter notes represent each beat as we all know by now.

Now let’s analyze the drums and cymbals used. The first four notes are all in the second space, usually used for the snare drum, followed by two notes on the first space (smallest tom-tom on your kit) and two notes on the third space (floor-tom).

The fill ends with a quarter note (black note head and straight flagless stem) played in the bass drum and a crash at the same time (X above the place where the Hi-Hat notes normally are).

Now that we know how many notes we play and where they will be played, imagine the drum fill in your head. What does it sound like? Now compare it to the sound file:

Now let’s learn a few more grooves and fills, but this time around, you’re the one dissecting each one and figuring out what they should sound like:

Now that you acquired a new skill you want to practice as much as you can.

With that in mind, I compiled a list of websites where you can find free drum sheet music:

I hope I achieved my goal by helping you understand how to read and write drum sheet music.

How to count, the difference between all the notes and rests, and what parts of the drum set should be played are some of the things I expect you to know by now.

Like I said in the beginning if you’re serious about becoming the best drummer you can be, learning how drum notation works isn’t an obligation but is an essential part of achieving the desired success.

This post only scratches the surface of drum notation and drum sheet music, and if you’re serious about becoming a better drummer, invest some time into learning how to read and write more complex pieces of music.

The best part is, even though this post only focuses on the basics, if you had no problem understanding it, you should have an easy time learning the rest, as long as you put in enough time and dedication.

If you have any questions or even a suggestion, hit me up using the contact page or any of the social media pages.